Every item is also assigned a price range letter code. This range is our conservative opinion of the item's estimated value.
Item Description
The "Hamilton's Invaders Monster Science Fiction" toyline was produced by Remco Industries Inc. in 1964. Conceived and marketed by Remco on TV during the early 1960s, inspired by the popular giant insect film genre at the time. The insect toys worked via pull-string motors and were for use w/plastic soldiers and motorized artillery and helicopters. Remco also produced a bug-eyed helmet and grenade pistol which children could wear for total immersion in the play-acting scenario. Original Remco cardboard 6x13x16" shipping box has moderate wear w/moisture/tape staining and has all original inserts. Displays Fine. Comes w/10.5" insect - "Horrible Hamilton" - the largest insect produced for this toyline; three 3.75" long free-wheeling molded plastic insects, 6.75" long hornet helicopter w/wind-up rotor (rotor is the same color as the body instead of the orange rotor on most), pilot figure in cockpit and three unused small bombs for dropping on insects, large die-cut folding "Hamilton's Invaders Cave", and six soft plastic "Blue Defenders" (soldiers). Unplayed with set. Original lt. aged instruction sheet, set is complete and working. Exc. overall. The toyline was ended after selling for a single season, so all pieces are now highly sought after. See multiple other rare sets from this line in current auction #2189-2195.
Pictures (click images to zoom in) 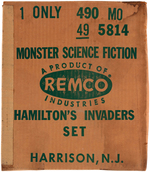 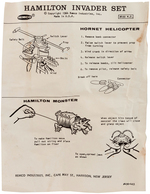