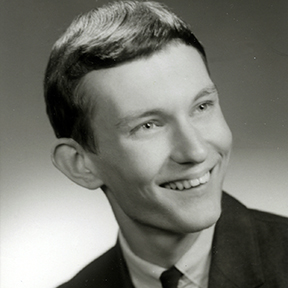 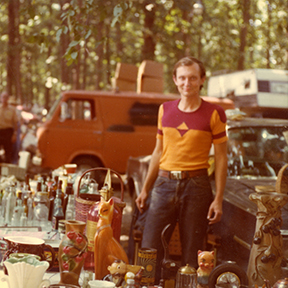 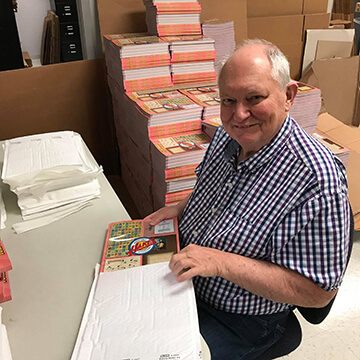 “Deak was one of those people you rarely, if ever, saw without a smile on his face, and his smile was one that would make you smile in turn, regardless of the kind of day you were having. In addition to being kind and upbeat, he was a true collector, particularly of Disneyana. I always enjoyed talking with him about our respective latest finds. While I’m so sorry he’s gone, I trust that I will see him again one day.” - Steve Geppi

“Deak was a wonderful and trusted friend for decades. For me, time is now measured as before Deak and after Deak.” - Ted Hake

“Deak is the reason I do what I do. As a young teen I started helping Deak at toy shows and his booth at Renningers Antique Market. That led to him getting me my first (and only) job at Hake’s when I turned 16, I have spent more time in Deak’s presence than just about anyone else in my life. Forget the countless hours at work, outside of that we had an incredible friendship. He took me to my first concert (and many more after that), we shared too many dinners to count at so many different restaurants, went on many long road trips in search of the next treasure, and so much more. He was always there for me. Whatever I needed, whenever I needed it. I never heard him say, ‘no.’ There is a void in my heart that will never be filled. I will think of him every day. His good-hearted nature and happy spirit will live on forever, I will make sure of that.” -  Alex Winter

“Deak was one of a kind and there will never be anyone else like him. I will miss him immensely every day.” - Heather Winter

“Hake’s will never be the same without Deak, he will surely be missed.” - Kelly McClain

“Deak was one of a kind. Absolutely one of the nicest people I’ve ever met and always ready with a smile. His knowledge, enthusiasm and genuine love of collectibles were inspiring, I’m glad to have known him and proud to have called him friend. He had the ability to light up any room he came into, and he definitely left his mark on countless lives. I will always cherish the many memories and funny stories he was roped into. He will be missed more than words can do justice.” - Mike Bollinger

“Deak was a friend, a mentor and the friendliest, most easy going man I ever met. He will forever be missed.” - Todd Sheffer

“Deak always had a smile on his face and no matter the situation had a chipper demeanor. He was always up for a meal and so gracious with his knowledge to any who would seek it. His extensive experience and unwavering dedication to collectibles and the local restaurant scene is going to be greatly missed. I hope wherever he is now they have a sufficient supply of shrimp and scallops.” - Scott Mussell

“Deak was always a joy to be around. Even in moments where you would think there was no joy to be found he always managed to make me smile. Whether it was on purpose or just a laughable absurd comment, he not only made me feel like he cared about me but also about my life in general. He would always sincerely ask about my wife and child but also my friends and parents whom he may have only met a couple times. He was just the pure definition of a very nice person and I think this world needs more of that. The time I shared with him will always be cherished and never forgotten. To say he was like family to me is almost an understatement because I have family that I don’t even care for, but I cared about Deak. My only hope is that he could tell that I and others felt the same way about him before he left. He will be missed.”
- Terence Kean

“Deak truly had an interest in collectibles, it was obvious when he would look at the items that came into Hake’s. I’m thankful for having gotten to know him.” -  Al Bennett

“As I stood in silence upon hearing this news, I felt sad that we had lost a friend, but took joy in realizing that Deak was able to enjoy his extended family every day as he continued his devotion to the ‘family’ at Hake’s.”
- Jack Dixey

“Deak was a wonderful friend. He always had a smile and would do anything for you. My favorite thing about Deak was when it came time to do shows with him, he always knew where the best places to eat were. He would even use restaurants as landmarks when giving directions. He will be missed greatly.”
- Jarrad Grove

“Deak was a joy. He always had a smile on his face and was glad to see you. A great sense of humor, kind demeanor and a deep knowledge of collectables always guaranteed a nice conversation. I was lucky to have seen him only a few days before he passed away, he was his normal, jovial self and so glad that is my last memory of him.” - Warren Bernard

“Although long distance travel limits my opportunities to make it up to York, PA, one thing is for certain, I truly enjoyed my time up there and Deak was certainly a major reason why. From the always courteous assistance that he provided at the office throughout the workday to the afterhours dinners and other fun times that we had over the holidays, Deak was a joy to be around, always creating a happy and upbeat atmosphere. Deak will certainly be missed during future visits to the office, it will never be quite the same for me without him there. May Deak rest in peace.” -  Philip Garry

“Deak had an easy way about him that was uniquely his.  He was kind to a fault, but beyond that he was an relaxing presence who was quick to share his collecting knowledge whenever asked.  I enjoyed my time with him and will miss seeing him at the Hake’s office.” - Sean Rutan

“I really can’t remember anyone that was more welcoming and helpful.  He always had a smile on his face and was always willing to do whatever needed to be done without complaint.  Honestly he would walk into a room and by default he would bring a smile to your face.  Between his broad knowledge and amazing willingness to always help he was someone that was always there and able to be counted on.  He never looked for loads of recognition or accolades but he deserved them all.  He will be missed on so many levels many of which this hobby and the Hakes family has yet to even realize.” - James Gallo

“In life, we are known by our first and last name. Only a very select few ever become known by just their first name. To be a mononymous person is a true rarity. For decades I’ve known such a person and his name was Deak. I grew up seeing him over the years at flea markets in Pennsylvania and the offices of Hake’s when they were located on Market Street years ago. Years later, I had the opportunity to spend time with Deak when Hake’s was acquired by Steve Geppi and most recently with me working as a consultant to the company. Deak was a truly rare individual with always a smile on his face, a story, and ready for fun and a good laugh. Rest in peace Deak. You will be missed by many!” - Tom Gordon